Fastest golem but not very powerful.

The Wind Golem (or Tornado) is one of the four elemental Golems in the game, the fastest one on movement speed, but the slowest one on fire rate.

The Wind Golem was introduced as a new unit alongside the 3 other golems during 2012's Doomsday Event. The special trait of this golem is their fast movement speed, which can make them being able to dodge Mortars' bullets. Their fire rate speed is of exactly 0.3125 (or 1 shot every 3.2 seconds). They are also the second golem with lowest health and attack. They can be bought separately for

10, or as part of the Doom Pack in the Premium Shop for

Due to their relatively low health compared to the Fire and Earth counterparts, this type of golems can be taken down with a couple of Zeppelin and Colossus shots. If using ground units, it's recommended to have some kind of distraction buildings or units to prevent these golems to badly damage or kill them.

An effective combination of defensive buildings against this unit could be Freeze Turret and Mortar, or a Freeze Turret with a bunker filled with Colossuses, Zeppelins or Falcons.

Filled-up Bunkers can be highly effective against these golems since they are slow attacking, have low range and have a moderate amount of health. Because of this, distracting them or slowing them down with a Freeze Turret before they can target a bunker can be very helpful when defending the base from them.

Wind Golems can be useful to be an powerful starting push-up against turrets such as the Cannon Blast and Sniper Tower. For the other Turrets, it's recommended to distract them with other units to prevent the golem from being taken down quickly.

They can be used to finish off already damaged buildings and defenses but, in general, defensive back-up is always recommended. 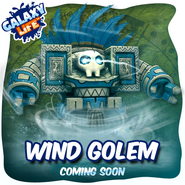