The Tree of Life is a tree where Starlings are born. It's on the original planet the Starlings escaped from and it holds seeds in pod shaped leaves, similar to that of the Mielindrocus family. The seeds drop from the leaf after ripening, and the seeds transform into starlings. 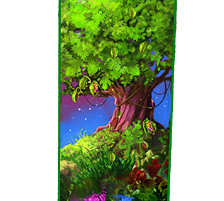 As the story goes, the tree gave birth to a rotten seed. The rotten seed was purple instead of the normal orange, and it transformed into an evil starling named Firebit. Firebit would later become the antagonist of the game. It's rumored Firebit was corrupted by the purple crystal, Viotalite . It is unknown how Sparragon got his color, but some think he was exposed to the power of Radquidite . Maybe it's because when he fell off the tree, he wasn't ripe.

The tree of life.

A close view of the pod-and the rotten seed.

Viotalite, the crystal that's supposedly corrupted firebit
Add a photo to this gallery
Retrieved from "https://galaxylife.fandom.com/wiki/Tree_of_Life?oldid=43322"
Community content is available under CC-BY-SA unless otherwise noted.