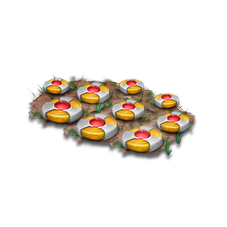 Other Types Of Traps

Traps are the most basic type of mines, other versions include:

Blue Trap - This explosive device self-destructs with a burst. Deals higher damage to ground forces. Function exactly like regular traps, aside from the fact that they do 200 more damage.

Fly Trap - "Chubi is a genius! He has managed to make this destroyer device fly!" Focuses on tanks. When triggered, it will fly up into the air and spin, shooting out bullets that do area damage.

Traps as they appear in the Shop

Blue Traps in My Stuff

Fly Traps in my stuff

A 'Explosive Pumpkin' from the Halloween Event. More powerful than the standard Trap

A 'Mighty Mine' from the Doomsday Event. More powerful version of a standard Trap
Add a photo to this gallery

Retrieved from "https://galaxylife.fandom.com/wiki/Traps?oldid=43587"
Community content is available under CC-BY-SA unless otherwise noted.