These golems are fast but not very powerful.

The Thunder golem is one of the four elemental Golems in the game, and the weakest one.

Introduced on 2012's Doomsday Event, the Thunder Golem was introduced as a new unit alongside the 3 other golems. This golem's special trait is the ability to attack faster than the rest, being the speed of 1 attack every 1.8 seconds, with the drawback of not having much health nor attack damage as its other variants. They are also the second golem with the most range and the one with the lowest Warp Gate size. They can be bought separately at the price of

5, or as part of the Doom Pack in the Premium Shop for

Because of their low health, they can be easily taken down with the use of a Mortar and another turret that can finish it quickly, such as a high-level Laser Tower or even a Freeze Turret to slow it down before it can deal significant damage to buildings. If alone, they can also be defeated with 2 Colossus shots or with the use of only 3 Falcons in a Bunker. Using 2 normal Traps are also enough to kill them.

Zeppelins are not that recommended due to their slowness, but still, if they are used in groups, these can take down fairly easily groups of golems instead of just one. A max-level Starlinator can also defeat a Thunder Golem if fought alone due to their superior fire rate. A level-5 (or superior) Kamikaze can also instantly kill them, but their low health might make them die before reaching to the golem.

Their relatively low health, but high amount of damage makes this unit recommended to be deployed with support backup that can absorb good chunks of damage for it. Recommended units include Beetle Tank, Colossus, and other golems. If the player can't train Colossuses, then these units are a good replacement for them.

They are also the golems with the lowest Warp Gate size, which means that they can be deployed in superior amounts than their other counterparts.

Doomsday loading screen (featuring the unit in the background). 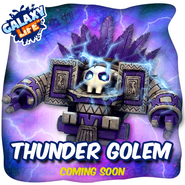