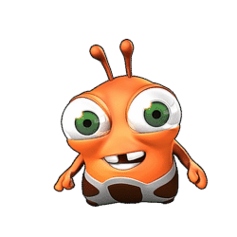 Starlings are the cute (but certainly not cuddly!...) civilization that you will help to rebuild their Empire. They live in a distant Galaxy scattered on numerous Planets. They are little cute creatures that live on the planets you discover. They are all born from the Tree of Life and they are all orange, except Firebit's purple ones, Sparragon's green ones and Reptice 's blue ones. There have also been some pink female versions in pictures on the Facebook page for Valentine's day etc, although they have never appeared in the game. They can be seen talking using emoticons on your planet sometimes. Some say that they are around the size of an apple, whilst others say 20cm. Some live in the Compact Houses or work in the Mines that you build, and when you collect from these buildings the Starlings will come out and run to the Star Base where they deliver their goods which they carry in a sack on their back. They also seem to drink 'star coffee', another interesting fact about starlings is that they are named after a Flash render engine.

A Starling reaction when they are meeting.

A Starling's reaction when clicked on.