90 for 5 of them. One is also given for free after completing the Mercenary Attack! quest. The sums of their health and damage sums a total of

Once bought and used, a giant egg-shaped capsule will fall from they sky to where the player clicked, open up and will show the mercenaries inside: 3 Mercenary Marines and 1 Mercenary Mech which will immediately start attacking nearby buildings and defenses.

Due to their large amount of health and damage, they can easily take down almost any defensive building with ease, although they might disperse if there are no more defensive buildings close to them, which can increase the odds of them being defeated. Because of this, it's recommended to deploy them with the accompaniment of other strong units with high health such as the Colossus to distract defensive attacks from killing them while they deal damage.

Although they are powerful, they can still be taken down fairly quickly if fought against bunkers full of Colossus, Zeppelins and high-level S-Trikes, or if put against well-placed Mortars. In those cases, if the bunker is alone, it's better to use around 10 Colossus (or some Zeppelins) to take down as quick as possible both the bunker and the units, and use only Zeppelins or special attacks to take down the Mortars.

Upon completing Firebit's mission, the player will get a quest called "Mercenary Attack!" with the player being warned of an incoming attack in a text bubble beside the mission's icon.

The Smasher Squad was were hired by someone, and are looking for the player to destroy their army. After that, the player has to resist an attack from them. If resisted successfully, they will become allies and can be called in battle at any time by paying chips. The player will also get one support squad for free. 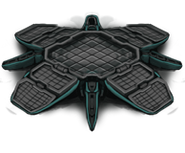 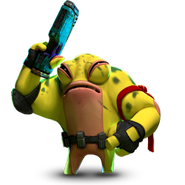 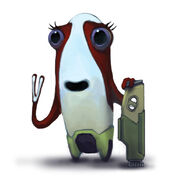 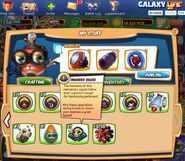 Smasher Squad in the Inventory

Smasher Squad in the attack menu.

Statistics (in the attack menu).

First sighting of the mercenaries.

Enhanced Image of the first sighting.