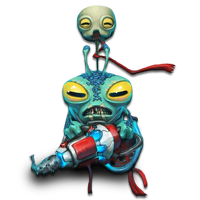 Reptice is the very latest antagonist in the game. He lives on the other side of a black hole. He also invented the ice blaster. In order to get the Freeze Turret which uses the ice blaster, you need to have a Star Base level 4 or higher, (When you try to go to Reptice's planet with a lower Star Base level this message shows:

"Your main HQ must be at least level 4 before you can send an army through a black hole!"

Apparently, Reptice is a wizard according to the description: "We first need the blueprints to build the Freeze Turret! Rumor has it that Reptice, a hideous Starling wizard, knows the secret to slowing down time. Find him in the Planetary System, destroy his HQ and seize the blueprints for the Freeze turret!"

Upon defeating Reptice, he reveals that he was never hostile. He was a wizard, revered by many Starlings. However, an experiment went wrong and it left him deformed and ugly. The starlings hated him, so he escaped through a warp gate to a parallel universe.

Reptice's Planet
in the System View

Promo for the Reptice update