View source
watch 01:36
We're Getting Mutants in the MCU - The Loop
Do you like this video?
Play Sound

My Stuff is the player's inventory system which allows them to see which items, and units they have.

My Stuff is a window that can be accessed when clicking the box button in the bottom toolbar when in the players' main planet or colonies. It is separated through 4 different tabs that serves different purposes: inventory, collections, crafting and skins.

When a new item is obtained, it will make an notification bubble to appear at the top-right corner of the My Stuff button and in it's respective tab; the new item itself will appear with a red outline.

The Inventory is a section that allows the player to view which items, building and units they have, as well as allow them to place the buildings or use the units saved there. When obtained, all items will automatically go to this section (except for collection / crafting pieces). Units can be saved in the inventory when completing missions or collections.

You can find your collections in the My Stuff Box located under the Shop. They are in the "Collections" Tab. There are exactly 5 collections and every one of them has 5 items that need to be found to complete them. From Collections, you can get Blue Traps, Fly Traps, Starlinator, Colossus, Zeppelin and the two new recently added items: Cristal Fluid and Fission Device, that are needed to craft The Skull Nuke battle support weapon.

This explosive device is self-destructed on burst.

Chubi is a genius! He has managed to make this destroyer device fly.

We are Starlingators, the best-trained Starlings you'll ever see. You have to be very careful, we might harm you if you get to close!

We're not wearing a costume! This is a real tank-shaped armor that allows us to attack all our enemies' defenses! Try it out!

Arr! We are pirates of the stars! We drive this mighty ship to throw things at our enemies, and we always win!

Starlings use this powerful and dangerous liquid in their most lethal weapons!
Item needed for crafting the Skull Nuke battle support weapon.

Starlings worship him, 'cause they need to focus on battles.

Some Starlings believe they have evolved from this lovely 'thing'.

The Skull Tempel is a very cool item! It's new and awesome!

You can find a good use for some extra coins. Right? I thought so! Starlings worship him, 'cause they need to focus for battles.

Add more bling to you mineral storage! Your colony will celebrate in joy!

You can find your Crafting collections inside My Stuff Box which is located underneath the Shop, on the "Crafting" tab. There are 4 Weapons that can be crafted: the Missile Rain, Boulder Strike, Skull Nuke and Freeze Bomb. You can also buy these weapons with Galaxy Chips

"A powerful area attack that fills the sky with missiles". It is used while attacking and deals medium damage to more than one building or unit. If the enemy has a bunker filled with purely ground units and those units are anything short of a Colossus squad, one of these can pretty much neutralize the bunker garrison if timed properly. However, it may not destroy the building itself...

"A huge rock that will shake the galaxy". A very powerful attack that can deal heavy damage to one target like Defense Bunkers or defensive towers like Mortar. It does have a slight AOE, about the size of the rock itself. Carefully positioned strikes can hit multiple targets, Targeting level 4-above Starbases are not recommended, as they survive it.

"Wipes out your enemies with a huge boom!" Buy it during a battle for a destruction boost!

The Skull Nuke is another addition to the Starlings Arsenal of special battle support weapons. It is now lumped in with the crafted weapons, but you also can buy it for

The crater left by a Nuke 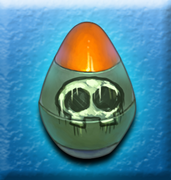 Close View of the "Skull Nuke"

Right Before The Explosion 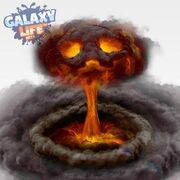