Specialized in looting resources buildings. Defensive backup from other units is recommended.

Looters are an infantry unit whose specialty is draining enemy resources from their buildings.

Looters are the weakest looting-related unit in the game. For that reason, they should be used in tandem with other stronger units that backup them and can help take down enemies' defenses, leaving a free path for them to loot the whole base's resources.

Before deploying them in a base, it should be noted that Looters have a point-blank range, so they are more likely to be easily exposed to enemies' defenses and be taken down with ease. For that reason, low-level players tend to use them along with Flamethrowers. Other strategy used is to quickly take down enemies' defenses with Falcons and then deploy them to loot the base.

Since they take 15 Warp Gate's size, they are recommended to not train in massive amount since that would leave less space for more stronger and useful units when attacking.

Due to their low health, attack and range, they are extremely easy to be taken down when used in (or against) Defense Bunkers and Friends Bunkers.

Note that they do 3x damage to resource buildings. 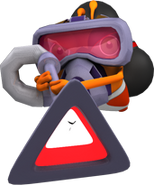 You just got a looter

A level 7 Looter in the Training Camp.