This article is Missing Information. You can help Galaxy Life Wiki by completing it.
You may also find Info Req. site on specific sections where info is required. 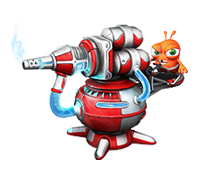 To see detailed info on how to unlock each level and the total amount of buildings
per Base level visit: Building Level Unlocks at Star Base's Page.

A View of the Freeze
Turret in the Shop

Freeze Turret Launching Ad.
Add a photo to this gallery

Retrieved from "https://galaxylife.fandom.com/wiki/Freeze_Turret?oldid=40736"
Community content is available under CC-BY-SA unless otherwise noted.