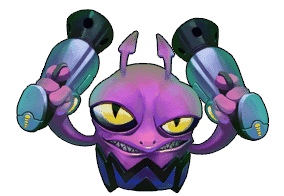 Firebit is the most notorious of the three main antagonists in the game (There's also Reptice and Sparragon). He is born by a rotten seed of the Tree of Life, hence his purple color, instead of the Starling Orange. He attacks you at the beginning of the game, on the "Save The Starlings" mission chain, and a few missions after, he has rebuilt his planet and kidnaps your Starlings. That kidnapping is the beginning of the main story. You must obtain the Delta Key, and then destroy Firebit's Star Base so you can rescue the Starlings. After that, you can attack him as many times as you want, but per attack, his planet will be stronger as the main enemy he is!

Retrieved from "https://galaxylife.fandom.com/wiki/Firebit?oldid=43426"
Community content is available under CC-BY-SA unless otherwise noted.