To be clear: The most powerful golem.

The Fire Golem (or Fire) is one of the four elemental Golems in the game. They are the most powerful variant.

The Fire Golem was introduced during 2012's Doomsday Event as one of the four new Golems units added. This variant's special trait is their extremely high health, damage and fire rate speed points, but have the biggest Warp Gate size, and is the second golem with the lowest movement speed (the slowest one being the Earth Golem). Their fire rate speed is 2.2, meaning that they shot once every 2.2 seconds. They can be bought separately for

40, or as part of the Doom Pack in the Premium Shop for

Fire Golems are extremely powerful units that can take down practically any building or unit within seconds. Because of this, the use high-level Freeze Turrets that can decrease their Fire Rate might be a very effective strategy to begin with.

Because of their both attack speed and power, they can one-shot a couple of Colossus if they are not surrounded with distractive targets such as buildings, turrets, or other units. Because of this, it's recommended to surround the bunkers and turrets with lots of buildings and accompany them with Freeze Turrets and Mortars to distract the golems as much as possible while strong units take them down.

Because they only attack ground units and are a serious threat, Zeppelins can be very useful gainst them since they have no chance of being defeated by these golems. Because Zeppelins are slow and have very low range, the use of Freeze Turrets is further recommended. Falcons may be an effective unit too. Specially if there are no other enemy units around to distract them.

A Mighty Mine will leave them with

2,000 health if no prior damage was dealt, which can render them as an easy-to-defeat target for practically any swarm of units. Placing a Migthy Mine along any traps will take down this golem instantly.

If using in defense bunkers, as with Earth Golems, powerful defensive backup with splash radius such as Colossus and Zeppelins is recommended.

Due to this unit's strength, practically no defense by itself is a threat to them, but the use of Freeze Turrets with Mortars or Bunkers filled with powerful units such as Colossus or Zeppelins will likely take down this unit if it's alone. Defensive and powerful backup that can target both ground and air units is recommended. Such units could be Colossus or Falcons.

Using other units for distractions can be useful, as this golem can one-shot most units and take down quickly those who can resist more than one hit. 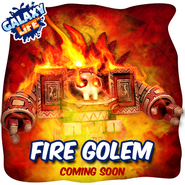 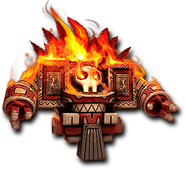