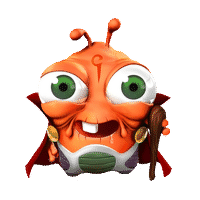 Elderby is an old and wise starling. He is the first friend you will have. When you begin the game, you look up to Elderby. He might be referred to as 'the great player'. He kept level 7 before the update, which is impossible for his planet's level. He gives you a few missions, the last one being Training Days. His level is 100 but it is possible to pass his level. The more you play, the more realistic it is to have a planet like Elderby's one and even much powerful. Thus, Elderby is the most powerful game character in the game. If Elderby can be attacked, a new player is impossible to break his defense. Once you get a Level 7 Star Base Elderby's planet will look really weak and easy to destroy.