The strongest golem, its weak point is that is very slow.

The Earth Golem (or Rock) is one of the four elemental Golems in the game. It is the strongest golem with the most health points and damage, but the slowest one on both movement speed and fire rate.

The Earth Golem is one of the four golems units added in the game during 2012's Doomsday Event. They have extremely high amounts of health and damage, but in compensation, they have the lowest range amongst their counterparts and they are very slow when moving and attacking; their fire rate consists of exactly 0,2127(...) points (or 1 attack every 4.7 seconds). They can be bought separately for

30, or as part of the Doom Pack in the Premium Shop for

Their extreme slowness can be used as an advantage, as a high-level Freeze Turret along with a Bunker filled with Colossus, Zeppelins, and / or Starlinators nearby will render them as practically useless and will be defeated with ease. Swarms of enemies are useful against this golem due to the fact of it being a single-target unit with extremely slow fire rate, so Bunkers filled with Starlinators along with a high-level Freeze Turret is a powerful — and not very expensive — combo against this unit.

Because they have a lot of health, any unit that is not the Freeze Turret or the Mortar will practically have no effect on them. So, in this case, it's better to rely on big quantities of strong units to defeat them rather to use turrets to deal most of the damage. Still, they can be used as a distraction, since almost turrets on level 3 or more can resist more than one hit from them (with the only exception being the Freeze Turret). Mighty Mines will leave them with 9,000 health if no prior damage was dealt.

Due to their extreme slowness, they're also target for Mortar shots, which can be a good push of damage along with a swarm of powerful units.

When used to defend the base in a bunker, back-up units with splash radius damage such as Zeppelins and Colossus is highly recommended.

Because of their extremely high health and damage points, these units can take down any turret and bunker with ease. The only scenario which could be dangerous for them would be the use of bunkers filled with strong units, which will likely defeat the golem if it's alone. Because of that, and due to the fact they are slow and a single-targeted unit, strong units such as the Colossus or other golems are a recommended backup if fighting against powerful bunkers. Deploying distractive units closer to the bunker before the units inside of it spawn will help the golems to defeat some units while they are distracted, especially level-1 colossus, which can be taken down with one hit.

If there are zeppelins in the bunker, then Colossus will be helpful to take them down relatively quickly before they deal serious damage to either the golem or any other unit. 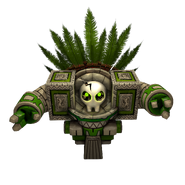 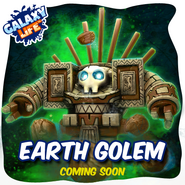 "EARTH GOLEM! This bad boy isn't the fastest of the class but he can surely take a lot of heavy damage! Be careful, it shoots giant boulders to your Starling's heads!"