Start a Wiki
Chubi A.K.A The scientist is the only Starling that is a scientist, he has a lot of knowledge, unlike the other NPCs. He gives you multiple missions where he advises you to upgrade your base or build the new unlocked buildings, as an advice from me you should listen to him in most of the cases, he'll lead your base to success.

Chubi is the head scientist Starling in the lab. He delivers all the new game features, after carefully developing each one. He is the first one who was introduced on the fan page (Facebook). He can also be seen from time to time on the loading screen. 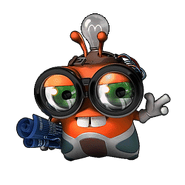 Chubi in-game.
Add a photo to this gallery
Retrieved from "https://galaxylife.fandom.com/wiki/Chubi?oldid=40630"
Community content is available under CC-BY-SA unless otherwise noted.