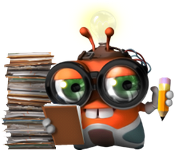 During the game, there come's a point where players feel the need to look up guides and tips that way the game will go faster for them. This section will link you to the area's of the wiki, as well as posts from the official forum to offer your players assistance.

Below is a shortlist of frequently asked questions throughout the adventure of the game, or for the new player in a time of confusion.

What are the houses and resource mines for? The houses are where your Starling minions live and you can obtain Coins from them in the form of taxes. Resource mines extract Minerals from your planet. Clicking at any time on a house or resource mine will collect the Coins or Minerals that have been accumulated so far.

What are the different resources and currencies in the game?

How do I build buildings? The shop lists the buildings that can be built in the Resources, Army, Turrets, Defenses and Decorations tabs. Selecting a building and placing it in an empty section of your colony will set a worker to begin construction. Note that some buildings require you to upgrade your Star Base to a certain level before you can build them.

How do the workers affect my progress in the game? How can more workers be obtained? Buildings require a worker when they are being constructed or upgraded. If all the workers are busy, you will have to wait until one is free or obtain another one. Certain items such as a worker’s helmet, toolbox, and mallet are required before you can add another worker to your colony.

How can I finish the building of a structure now? Clicking on a building that is under construction, or being upgraded, offers the option to Instant Build. It will cost Coins or Galaxy Chips to complete the action depending on the time remaining.

What are building Levels? Each building has a Level that describes its strength and can be improved over time by upgrading. The Levels of some buildings, such as the Star Base, are particularly important, as upgrading it to new Levels unlocks other buildings.

I ran out of space, how can I expand the colony? Space is limited on each planet, but once you run out of the room you can expand your empire by establishing a new colony on another planet. You will need to unlock the observatory building to allow this. Managing multiple colonies presents a greater challenge but offers better rewards!

How do I gain victory over a rival colony? Victory is earned if you manage to “destroy” the rival colony’s Star Base. The booty from looting a rival colony can be substantial even if you do not manage to raze their Star Base to the ground though!

Is my game over if my colony gets “destroyed”? No, your Starling minions are fully capable of rebuilding the colony. You simply need to command them to perform this when you enter the game and they will get to work. The time required to fully repair your colony will depend on the damage that was inflicted.

How can I assist my friend? Visiting a friend’s colony allows you to help them in many ways such as improving the production of their resources, reducing the time required to repair buildings or donating troops for their defense. If a friend requires special items, you can see their wishlist in the Friends Bar and donate items that you may have. It is also possible to send free gifts daily to help out your friends. When you receive gifts from friends it is considered good protocol to send them a gift back. Synchronizing your attacks with a friend may prove to be effective against some enemies and can be coordinated using chat.

How can I construct an army? The Training Camp, Factory and Starport buildings are used to construct your army. Constructing these buildings and clicking on them will allow you to add units to the preparation queue. If you are impatient you can speed up the queue with Coins or Galaxy Chips so that the units will be ready to use instantly!

How do I attack others? You can find players to launch an attack on in your Friends Bar or in the Map view. You will always be able to reach your friends from the Friends Bar, either to visit or to attack, but if you are looking to reach other players from the Map you will need to have one of your colonies within range.

Can I control the units in battle? No, this currently isn’t available, however, you can decide where your troops are deployed!

Why is it that when I send some units to attack they don’t go to the buildings I would like destroyed? Many units have specialized skills, meaning that they will target certain buildings first. Make sure that the units you send are the right ones for the mission you have in mind!

How do I activate new units for my army? Clicking on a Training Camp, Factory or Starport will show the units that you have available as well as the ones that you still need to activate. Selecting “Activate” will start the research required to unlock the new unit.

How can I improve my army? The Laboratory is used to “upgrade” your army units. Time spent researching a unit will improve its speed, resistance or strength in attack and defense.

Are the units I send into battle able to return to my colony? No, unfortunately, the Warp Gate used to send units into battle is not powerful enough to bring them back. It is only barely able to return the booty that you manage to loot. You will need to judge the right amount of units to send to avoid wasting units unnecessarily.

What does Experience (XP) mean? Experience (XP) is given for performing actions such as building, upgrading, destroying buildings, and defending. The level of your XP increases over time according to these actions and serves as a warning to other players of your power.

How does the Scoring System work? It employs the principle of B.A.D.: By this new system, you level up Building (B), Attacking (A) and Defending (D). (B.A.D.)

It means you have to upgrade turrets, houses, banks, mines, silos, walls, and Star Bases. It also means building more of the same. It will improve your Building Points.

A tip: The quickest way to get building score is by upgrading your Walls.

It means you have to pummel your enemies to the ground. Make sure you don't end up spending more on troops than you get by looting! For an effective loot, if possible, attack in two phases- use the first phase to hunt down and destroy the turrets, preferable units being Falcons, Moles, and Flamethrowers. Use the next wave than to loot your opponents, preferable units being Bazookas, Looters, Raiders, and Marines. This is merely an example- what you use in your battles should be what you're comfortable with! Destroying enemy turrets and buildings increases your Attacking score.

This is the most crucial step because you don't have control over what's going on when you're attacked, and so the least you can do here is ensure that minimum or no loot is taken. Place your Snipers and Cannons in pairs, in such a way that they complement each other. Also, place the Mortar and Missile Launchers together- they're a lethal combo, taking care of both air and ground. Make sure you hide your turrets well. Then place your Bunkers in such a way that their range of influence don't overlap, and contain a majority of the area where the enemy can spawn. Putting Falcons in the Bunkers is a popular idea!

Next comes the debate as to why this system is better. Since you don't get any score as you collect from houses or mines, it means that if you want to keep your score static, ensuring that less powerful enemies attack, while you save much-required money for upgrading or other tasks! It ensures that a person who's on the same score as you can only attack you. Hypothetically, you can be a level 10 with 10m coins stored! That way the enemies that attack you are easier to get revenge on, and it sort of creates a balance between players. Also, if you're not playing for some time, or playing only for saving money, the chances of getting your planet wiped out by a high leveled ruthless attacker is less!

What can I do with the collectibles or items? As you perform actions in your colony, or a friend’s, you will discover unusual and interesting items. Some of these items make up a set of collectibles that can be traded in for prizes when completed. Other items can be combined to craft special attacks for when you want to wreak havoc on a rival. Remaining items are used for upgrading, adding more workers or can be directly applied in the game.

How do I join an alliance? To join an alliance you need to click on the Alliance Shield on the right of the screen. You will be presented with all the Alliances in the Galaxy; from there you should decide if you want to create your own Alliance or to apply for one currently active!

Info Req. The Battle Log is accessible by the blue bar at the top of the screen. It is Major Won's database. It keeps track of all the attacks involving yourcolonies. When you are attacked the background color of the box will be red, when you attack someone the box will be green. The last attack (the most recent) can be replayed again. If you attack someone in an alliance war, your alliance symbol will appear beside your name.

Since the Game Version 0.62.1 the coordinates for each colony now can be seen independently (no more hidden colonies exploit), and you also can see which Battle Support Weapons were used in the attack.

You can gather a lot of information from each attack:

The target spotter it's a wonderful tool to find enemy targets in a quick and automatic way. It will preselect for you targets of your same level or at least targets that you are able to attack, saving you a lot of work searching for them manually. It was originally made for the galaxy view, but can now be accessed from all of your planets and colonies by pressing its icon which can be found next to the upgrade button, just click on the Target Spotter Icon (see picture aside) and it will bring you a list of the available targets. You can instantly find someone to attack by clicking the "Find Target" button. Depending on your main planet Starbase level it will cost more minerals to work, for example for a level 5 Starbase, it costs 22,330 Minerals, which players with lower Starbase levels can't afford . If you are not happy with the opponent that got randomly selected then you can click on the "Find Target" button again and it will bring you to a different target. NOTE: By clicking the find target button for a random target you will not have a chance to spy first so bear that in mind when you use it.